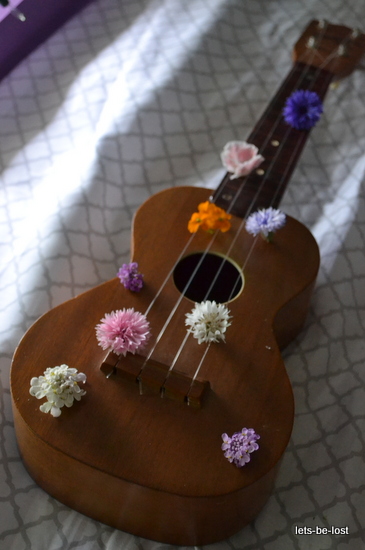 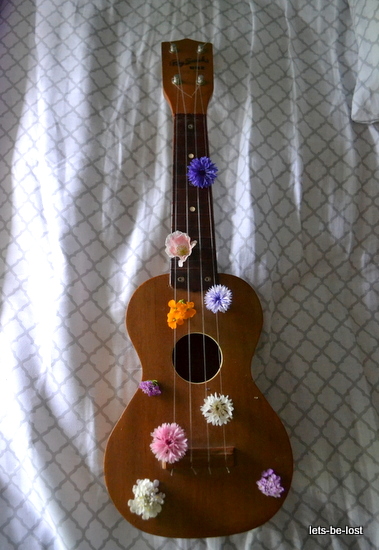 and, yes, i did pick wildflowers and cover the ukulele with them just for these photos.

i can’t even play the ukulele. yet. i’m trying to figure it out, but i’m not very good at playing instruments. i get frustrated too easily. but i’m going to try to learn it over the summer, since i don’t have much else to do. i want to be able to play the only exception by paramore, stomache tied in knots by sleeping with sirens, and can’t help falling in love (a song that has grown to mean the world to me. thanks, n.).

i’ve been playing it for a little bit each day, and my fingers already hurt like heck. i don’t know how people who play string instruments exist. they have too much endurance for one person. i know that i’ll get calluses on my fingertips if i play enough, but it hurts right now and i am in so much pain. (i’m being a little bit dramatic, but that’s just how i keep my life from being incredibly boring. also, i’ve been in one play and two musicals, so that gives me the right to be dramatic, yeah? .)

so. i always wanted to play the flute. and one year, my mom decided that my brother and i should learn to play an instrument, as part of our school. i, of course, chose flute, and my brother picked drums. we found an old homeschool mom who knew how to play pretty much every instrument invented, and we took lessons from her once a week. her name was mrs. t. this was a  m i s t a k e, let me tell you.

when we arrived at her house for the first time, her two sons were playing basketball in the driveway. there was a dilapidated playhouse which was being claimed by the wild. we went into her house, and there was this really distinct and overwhelming smell. it was kind of like homemade spaghetti sauce with way too many fresh herbs in it. mrs. t was a plump lady with white hair that looked like a bunch of cotton balls glued to her head, and she had this slightly evil, strained smile. the only good thing was that she had lots of cats, and they would walk into the room while i took my music lesson and lay on the sheet music.

anyway, my first lesson was incredibly awkward. i barely talked at all, because i hated how her house smelled and i didn’t want to breathe it in if i could help it. well, breathing is kind of important when playing a wind instrument, i’m not sure if you guys knew that.

mrs. t spent the first lesson teaching me how to put the flute together, how to clean and hold it, and how to get a crisp sound to come out of it. the flute smelled like my grandma’s nasty little schnauzer dog, by the way.

i realized a few things after that first lesson: flute is a lot harder than it looks, i would never be able to eat homemade spaghetti sauce again, and i really did not like mrs. t.

my mom made us stick with our instruments of choice for a year. by the time i got to quit flute lessons, the most impressive thing i could play was two lines of camptown races. i was very happy to quit, and although i still have my flute, i have barely touched it since then.

the two other music teachers i can remember were both from my co-op: mrs. u and mrs. c. mrs. u wasn’t a bad teacher, just a little too enthusiastic. she directed the musical that our co-op performed every other year, and i got the main role the first year i was old enough to audition. i played zoe (originally zach), the star of the basketball team who twisted her ankle before the big game. i had a fair amount of lines (snarky responses to other characters), but i mostly just got to sit there and look annoyed while everyone sang at me (i remember mckenna dancing around with a bible and basically telling me to change my attitude). the only song i got to sing in was the last one, after i had had a change of heart or whatever, and to this day, i will start singing it whenever someone says “everyday.”

mrs. c was a different story, though. she wrote the musical herself, and i don’t want to say that it was bad, but . . . i could have written a much better one. pup was one of the main characters for that musical. i was only part of the first act, so the practices were really quite boring for me. the only good things about that musical were that i got to laugh a lot with q and n during the practices, even though we got in trouble for it a few times. i also got to see n in a lot of dark eyeliner, which still stands as one of the most amusing things i’ve ever witnessed. i have lots more to say about this . . . slightly lacking musical, but that would be enough for a whole other post. i could write that, if you guys would be interested.

so, that pretty much sums up my experience with music classes. for someone who listens to music so much, it’s probably a bit surprising that i can’t play anything very well. hopefully i can become a little more than “absolute trash, seriously, why are you even trying” when it comes to ukulele.

i want to know about your awful teachers, because i’m sort of a bad person, i guess. so go ahead and rant about them in the comments, i won’t mind.